A complete power failure mid-ocean is thankfully rare, and it is usually the charging system that fails rather than batteries, writes Chris Tibbs. That said, when we bought our boat the batteries were so poor that once disconnected from shore power they only lasted a couple of hours before being completely discharged.

Nowadays it is unusual to find yachts with only one battery bank and without a dedicated engine start battery. Many of us have experienced selector switchers that can be left in the wrong position, so I prefer a set up so that it is impossible to link batteries like this. One boat I looked after had a paralleling switch to temporarily link all the batteries should the engine start battery not be up to the job. This had to be held in place so it could not be left on; we use a simpler solution and carry jump leads.

Long distance cruising yachts will usually have more than one means of charging the batteries and the majority of cruisers have solar, wind vanes, or hydrogenerators to back up the engine. Whilst these may go through one single regulator, each system will often have its own regulator adding some redundancy and backup.

Get your priorities right

If you have lost power production you need to reduce consumption and prioritise; top of my list is navigation lights – a masthead LED tricolour draws around 0.3A which even on a tropical passage with long nights is less than 3.5ampare hours. It also has the added advantage of lighting up the windex so we can reduce the time we use instruments.

The compass light is also important and this may draw as much or more than the tricolour, but steering at night is difficult without this reference point, particularly without nav instruments. 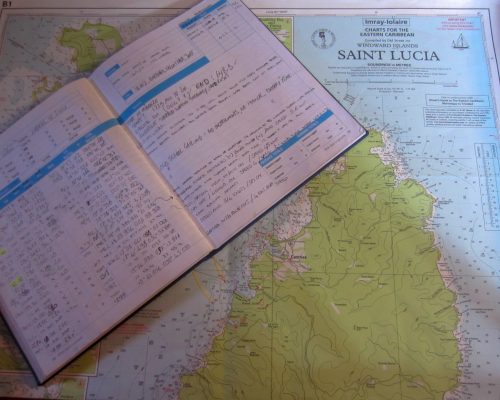 On an ocean passage like the Atlantic you do not need to know our position at all times, once or twice a day is adequate. This does mean that chart plotters can be turned off, and the GPS used only a couple of times a day to log position. A handheld from the grab bag can be used for this, as can the handheld VHF, as long as you have enough spare batteries.

High on the list of priorities must be starting the engine in case of an emergency; if all the batteries are connected together, as in Seraphina’scase (see right), it may be possible to mechanically split the batteries and use the solar panel (or petrol generator) to charge the engine start battery and keep it isolated for emergency use. I would also look at which batteries were in the best condition and reduce the number of batteries in the bank to try and get a couple of batteries to a reasonable level rather than all of them to a low level. By careful monitoring it should then be possible to prevent a total discharge.

On smaller and particularly older engines there may be decompressors to facilitate hand starting. I’ve never had much success hand-starting engines but have found it possible with a weak battery to decompress the cylinders, which then requires less power to turn the engine over before dropping the decompressor, as if hand starting.

Whilst AIS is a brilliant invention and I would not like to be without it, it is no substitute for keeping a good watch and in areas of good visibility, particularly in daylight, I would turn it off, or set to ‘receive only’ to save power. On a dark windy night it can be turned on again but I would rather have two crew on watch and hand steering for safety. Hand steering keeps us alert and I think much better watch keepers. The AIS alarm and MOB is essential, particularly if one person is watch keeping, so a balance needs to be found between conserving power and safety.

Small changes in the daily routine can also help save on power, having your evening meal before darkness will get food preparation and clearing away done without needing lights. Solar powered cockpit lights have become common and these can be used below when making drinks at night or visiting the heads.

Having to rely on a pressurised water system is not great and an additional foot pump is very useful. We do not have a foot pump on our boat so we carry a small syphon pump in case of electric pump failure as it is possible to get to the tops of the tanks and pump it out manually.

You can live quite comfortably on limited power – on my first ocean passage from the Virgin Islands to Bermuda without a fridge we had a very strict rule and only opened the ice box once a day to get food out. Seven days later arriving in Bermuda we still had ice. This may work for a freezer but the fridge would quickly warm and foods spoil. Just like you would not rely on one tank of water neither should you rely on one source of food. It may seem old fashioned but a good supply of tinned food is worth carrying; many have their own liquid which also reduces the dependence on watermakers.

With full-on trade winds, hand steering all the way will tire the crew so when short-handed the autopilot becomes more important to avoid excess fatigue. If you are two handed and restricting your autopilot use then reducing sail or even heaving to for a rest are options, however a good watch still needs to be kept for other vessels.

July 17, 2018
Dee Caffari puts most of us to shame. She turned up in the cliquey world of offshore racing in her mid-twenties without a reputation built... Continue reading
Cruising
Read more

July 17, 2018
After months of speculation – Yachting World broke the story than the IMOCA 60 class were in the final stages of negotiation with the Volvo... Continue reading

January 17, 2022 Comments Off on Alekos Fassianos

January 4, 2022 Comments Off on Happy New Year – Kali Hronia
© Boat.gr | Powered by  FutureMakers
We use cookies on our website to give you the most relevant experience by remembering your preferences and repeat visits. By clicking “Accept All”, you consent to the use of ALL the cookies. However, you may visit "Cookie Settings" to provide a controlled consent.
Cookie SettingsAccept All
Manage consent