Dee Caffari puts most of us to shame. She turned up in the cliquey world of offshore racing in her mid-twenties without a reputation built on years of Figaro or Mini Transat racing, no childhood spent dinghy sailing, no private backer, no technical advantage. No leg-up at all, in fact. And yet she was the only skipper in this year’s Volvo Ocean Race who has also completed a Vendée Globe. She has achieved so much.

Dee is a big believer that anybody can do the same. That can be a little confronting, leaving those of us who haven’t realised such dreams feeling a bit like a failure. For the pros who spent a lifetime racing off Brittany or the IJsselmeer it must be disconcerting to have someone who did a fast-track Yachtmaster course line up next to you on the skipper’s rostrum.

Perhaps because of that the armchair critics have not always been kind. Some questioned her lack of podium results, but in offshore racing a huge achievement lies in getting to the start – and an even greater one in getting to the finish. And that is what Caffari does – she gets around (the Volvo Ocean Race was her sixth lap of the planet).

Actually, looking back at her 2008 Vendée Globe what stands out is how she finished just five hours after Brian Thompson (who, with a Jules Verne title, nobody could accuse of not being performance driven). 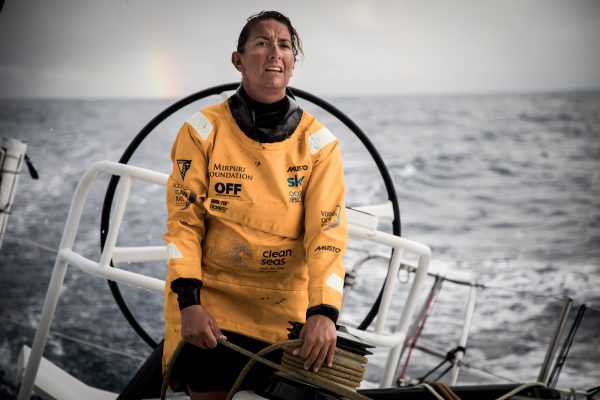 She has just completed the Volvo Ocean Race skippering Turn the Tide on Plastic. It is the second time she has led a crew around the world, and it is, in many ways, the perfect job for Caffari. It is also not a role many others would have taken on. But this is a woman who set off on her solo round the world record attempt in 2005, against the prevailing winds and currents, having never actually sailed single-handed before. Caffari is not easily daunted.

How did she work her way from being a newbie Yachtmaster to having one of the most complete and accomplished CVs of any offshore sailor?

“I’m stubborn and bloody-minded, and wasn’t going to take no for an answer,” she muses. “It’s about building connections and networks, and taking opportunities as they arise, and I’ve been very fortunate to be in the right place to do that. I’ve also had to be a bit more resilient than most.”

“She makes smart decisions, and she’s prepared to put a lot of blood, sweat and tears into making it happen,” observes Brian Thompson, who also raced with Caffari in the 2009 Transat Jacques Vabre, and navigated on Turn the Tide on Plastic. “She’s not afraid to have a big goal and work really hard to get to it.”

She may have come into the sport late, but her first job gave her a rich seam of connections. Starting out at Mike Golding Ocean Racing as a nipper on his corporate sailing programme, she joined a team that included Graham ‘Gringo’ Tourell, who was boat captain for Dongfeng, Jonny Malbon, as well as Golding himself. For a rookie it was the perfect teaching ground.

July 17, 2018
After months of speculation – Yachting World broke the story than the IMOCA 60 class were in the final stages of negotiation with the Volvo... Continue reading
Cruising
Read more

July 17, 2018
A complete power failure mid-ocean is thankfully rare, and it is usually the charging system that fails rather than batteries, writes Chris Tibbs. That said,... Continue reading